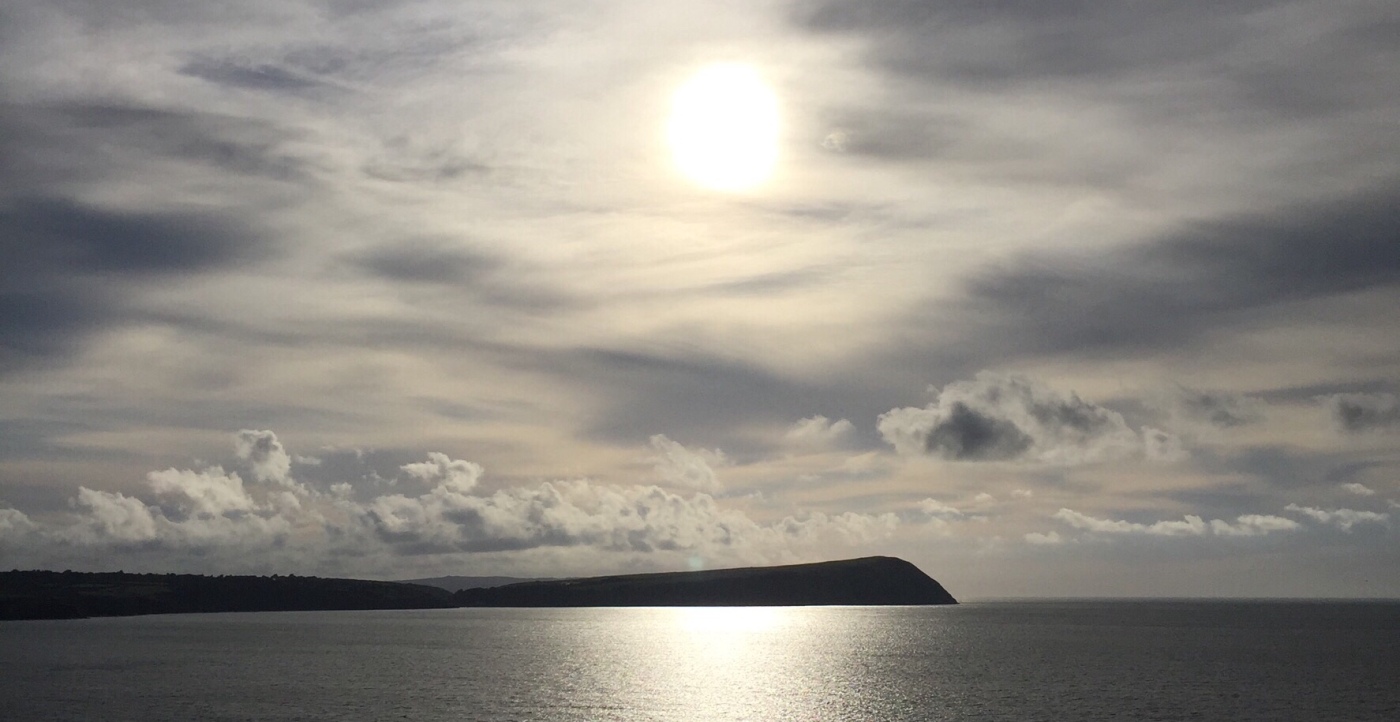 Two years ago I started walking round the Welsh Coast. Two years previous to that I had completed the Offa’s Dyke Trail with my daughter and it seemed rather elegant to completely circumnavigate a whole country. Long distance walks in the past had been in the company of my husband, or daughter, or friends, but no one was available when I wanted to walk the Wales Coast Path so this was to be my first solo trip. 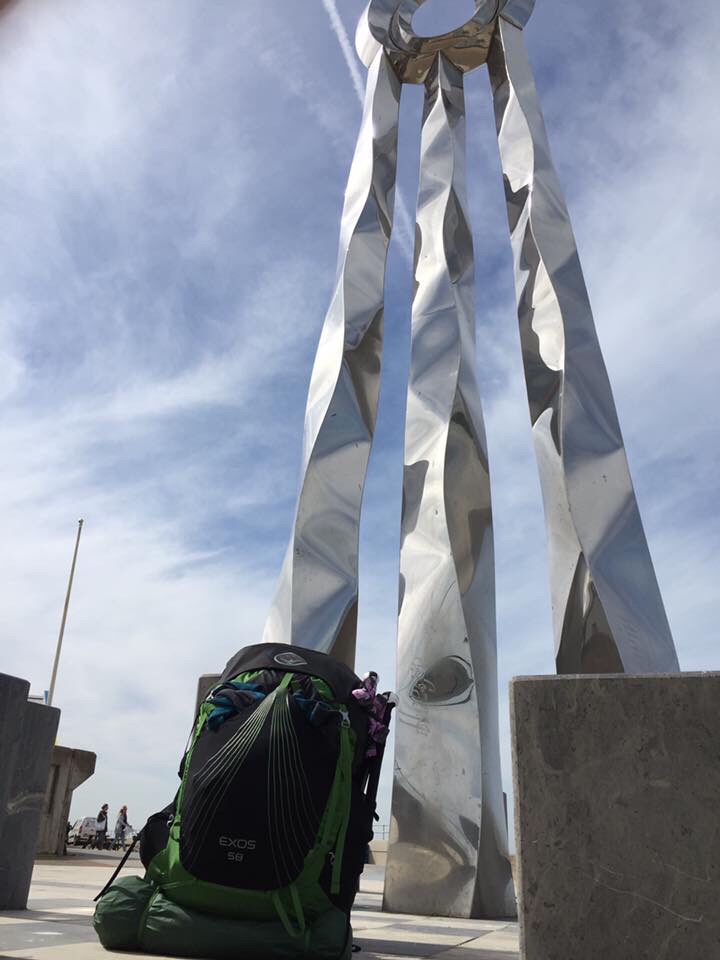 Over the course of 2016 I walked solo from Prestatyn, at the finish of Offa’s Dyke, to Pembroke, a distance of 400 miles, partly at Easter and partly over the summer. I enjoyed the route as much as any I have walked: it’s incredibly varied, passing through busy seaside resorts and over remote wild clifftops. The diversity of people, scenery and culture was fascinating.

The first few days took me through the resorts of Prestatyn, Ffrith and Rhyl. As a very young child I was taken to Ffrith beach on Sunday School trips, and I remember vividly the concrete ‘steps’ – sea defences – up to the promenade. I also remember being quite bored as it’s just sand and sea with no rock pools to potter in looking for crabs and other interesting sea life. I would never choose to walk through such places so it was fascinating to be given an insight into the lives of people who make different choices. Although the towns are a rather rundown they are well set up for the disabled, with cycle paths doubling as wheelchair access to the beach and the prom.

After Colwyn Bay and the Victorian delights of Llandudno, with its Alpine tramway to the limestone crest of Great Orme headland, the fleshpots of the seaside resorts are left behind. The land rises into hills and moors with excellent walking high above the sea. I didn’t visit Anglesey – I’m saving that for a later date – but continued along the Llŷn Peninsula, the site of all my childhood family holidays. My daughter joined me for part of this and I probably bored her with reminiscing as we passed through Aberdaron and Abersoch.

The great curve of Cardigan Bay was, apart from Harlech Castle, completely new territory. Again the contrast between the huge caravan sites heaving with people and the empty wild clifftops was marked. I walked through a nudist beach at one point feeling quite ‘exposed’ in waterproofs and backpack. Only two or three masochistic chaps were braving the chill wind that shrivelled the skin! 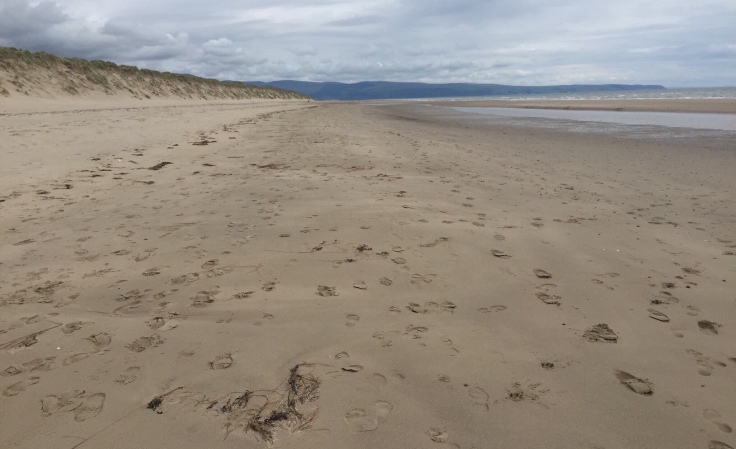 After Aberdyfi the route heads inland to Machynlleth to cross the bridge over the river, then rises to follow a line of low hills back out to Borth. It was rather pleasant to leave the sea for a while and see the distant Snowdonian fells. I had my family for company for a weekend before the remote Cardigan coastline swept me away from trains and most roads, through tiny villages and small attractive former fishing ports. The views were magnificent in all directions: back to the Llŷn Peninsula and the mountains of Snowdonia, and south to the Prescelli Hills and the Pembrokeshire Coast.

Once I reached Pembrokeshire I was back on familiar territory. And back to people and cafes and busy towns and villages. The clientele of this area were very different from the people who thronged the caravan parks of the more northerly sections; clearly much more affluent. On the cliffs between Fishguard and Strumble Head I passed a tiny cottage that we – my husband, daughter and my parents – had stayed in one Christmas. The only access is to drive for three quarters of a mile down a narrow unmade track. The cottage has no electricity, but does have a Rayburn cooker which heats water and a radiator, along with a gas fridge, a woodburner and fireplace. Lighting is by candlelight or oil lamp and there is no WiFi and no way of charging electronics. We only gave and received home made presents. It was the most idyllic Christmas holiday I’ve ever had.

The Pembrokeshire Coastal path is well known, well trodden and well signposted. In spite of this, or maybe because I’d become a bit complacent, I managed to run out of water on the day I reached St David’s and felt quite unwell with dehydration. Luckily the next day took me past Solva where the cafe had an inexpensive room free upstairs and I treated myself a rest day, with no camping. I carried a tent the whole way, but would use bunkhouses, hostels or guesthouses whenever I felt the need or an opportunity arose. I’d jettisoned the stove early on as there were plenty of places to forage for food.

The whole of the Pembrokeshire peninsula is delightful, apart from the oil refineries and industrial area around Milford Haven and Pembroke Dock. I wasn’t looking forward to walking through such a landscape and yet it was fascinating seeing the infrastructure that keeps society functioning. However the summer of 2016 was coming to its close and I needed to head back to work. The rest of the coast would have to wait for another year.

That year has now arrived. I have the opportunity to continue the route, with even the possibility of completing it. That’s assuming that I haven’t totally wrecked my left ankle and both knees after my fall a few weeks ago. Any sensible person would have rested to recover but I’ve never laid claim to being sensible. Thus the long day out over the Buttermere skyline, the failed attempt to run the Five Passes Ultra, and a manic final week of work teaching more than double my usual timetable of Pilates classes (with a focus on standing exercises) has a left me feeling hobbled by pain. I’ve plotted shortish days for the first week, with instructions to myself to just settle in one place and rest with a sketchbook if need be, in the hopes that this is a temporary discomfort. We shall just have to see what unfolds.

4 thoughts on “Walking the perimeter of Wales”